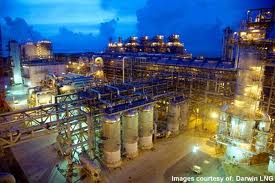 LNG is the acronym of Liquefied Natural Gas.

The Natural Gas is Methane.

The operation of Liquefaction is made by the compression of the gas at moderate pressure and cooling at the cryogenic temperature of – 160°C.

The volume of the LNG is 1/600th of its volume as gas, so that this liquefaction process is used for the transportation on long distances, such as between continents, where pipelines solutions are not viable.

One property which differentiates liquefied natural gas (LNG) from liquefied petroleum gas (LPG) is the low critical temperature, about -73°C.

Since the numerous impurities that are naturally found in the raw gas freeze at low temperatures, and would thus block the cryogenic section of the plant, the gas has to be purified before it can be cooled down to cryogenic temperatures. 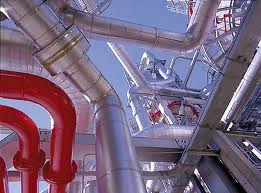 Gas liquefaction is a special case of gas refrigeration. The gas is first compressed to an elevated pressure in an ambient-temperature compressor.

This high-pressure gas is passed through a countercurrent heat exchanger to a throttling valve or expansion engine. Upon expanding to the lower pressure, cooling may take place, and some liquid may be formed.

The cool, low-pressure gas returns to the compressor inlet to repeat the cycle. The purpose of the countercurrent heat exchanger is to warm the low-pressure gas prior to recompression, and simultaneously to cool the high-pressure gas to the lowest temperature possible prior to expansion.

Both refrigerators and liquefiers operate on this same basic principle. 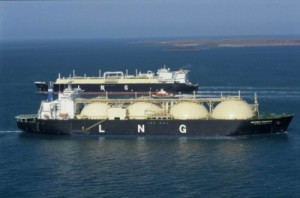 – LNG Trains for the production

– LNG Carriers for the transportation

Qatar has known the biggest concentration of LNG trains over the last 5 years, with companies like Qatar Petroleum, ExxonMobil, Shell and ConocoPhillips, mainly to supply Europe and North America.

A bit of LNG history

The first LNG plant went into operation in West Virginia in 1917.

The first commercial liquefaction plant was also built in the U.S., in Cleveland in 1941.

Almost two decades later, the world’s first LNG carrier transported a cargo of LNG from the USA to the UK, demonstrating that large quantities of LNG could be safely transported across the ocean.

LNG Transportation by marine LNG carriers has a long record of safe operation. In LNG‘s more than 50-year shipping history, LNG carriers have traveled more than 150 million miles without a major incident.

The USA exported its first LNG to Asia in 1969, with gas going from Alaska to Japan. From this point on, Asian markets for LNG continued to grow rapidly, from 20 million tonnes in 1980 to more than 180 million tonnes by 2005.

The growing demand in China, and the actual Japanese energy swap from nuclear to fossils source, should contribute a growing and sustainable demand for LNG in Asia.

The development of the shale gas in North America has nearly stopped all upstream capital expenditure for LNG in Qatar.

Today the biggest LNG projects are in Australia with Inpex, Total, ExxonMobil, Chevron, Woodside and Shell which has initiated the concept of floating LNG (fLNG) because of the long distance of the gas fields from the shore.

Tomorrow the LNG projects may expand on the East Africa where promising resources are under exploration ashore from Mozambique and Kenya.